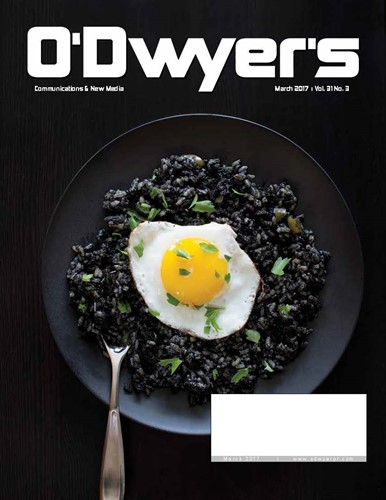 An important segment of consumers thinks food policy issues should play a higher profile in presidential debates. This sentiment is bolstered by a growing sense among the Opinion Leader Shopper segment that the primary responsibility for making the right food choices lies with society rather than with the individual.

There can be no doubt that U.S. politics has elevated to a new level of divisiveness, with various presidential decrees met with a high level of sustained protest. A Feb. 12 Gallup Poll indicates that President Trump currently has a net disapproval rating of -15 (40 percent approve / 55 percent disapprove), in sharp contrast to a Jan. 19 Gallup Poll showing a +20 approval rating (58 percent approve / 38 percent disapprove) rating for President Obama as he left office.

In this heated political climate, important and thoughtful debate over food policy has taken a last-row seat to heated arguments regarding hot-button issues such as immigration, foreign policy, health care and environmental regulation.

This is extremely unfortunate given the important role that food policy plays in ensuring access to safe, healthy food, especially for vulnerable populations such as mothers and infants, and low-income individuals and families and their communities. The new Republican control of all branches of government has major implications for the food, beverage and agriculture industries.

While President-Elect Donald Trump did not telegraph any specific policy actions or plans during the campaign trail, it is likely we’ll see a relaxation — and potential reversal — of regulatory action across all industries in an effort to down-regulate government involvement in food policy. This means many of President Obama’s food policy accomplishments may be on the line. As this article goes to press the $71 billion U.S. food stamp program faced intense scrutiny as members of Congress debate whether to prevent consumers from spending allowances on sugary soda, candy and other items deemed unhealthy.

At a time when Democrats and Republicans agree on few solutions to the challenges facing America, FoodMinds’ fourth “Food Temperance in America” survey found two out of three Opinion Leader Shoppers — registered voters that express their food values in the grocery store, in public forums and in their politics — support including food policy issues in the presidential debates, with 76 percent of Democrat Opinion Leader Shoppers and 50 percent of Republican Opinion Leader Shoppers thinking the presidential candidates should debate policy options around access to food, food assistance programs, food safety and education on healthy food choices.

There was an uptick among Republican Opinion Leader Shoppers calling for the inclusion of food issues in the debates, with only 42 percent of this group favoring food policy deliberation in 2012, the last time FoodMinds conducted the survey. 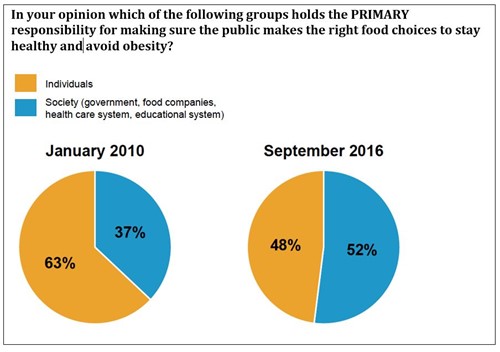 Since the FoodMinds Food Temperance Survey was first fielded in January 2010, there has been a steady shift in perceived responsibility away from the individual and toward other parts of society, including food companies, government, health care and education. During this six-year time frame there has been a 15-point change among Opinion Leader Shoppers, with more than 50 percent of such shoppers now believing the primary responsibility for making the right food choices lies with society rather than the individual. 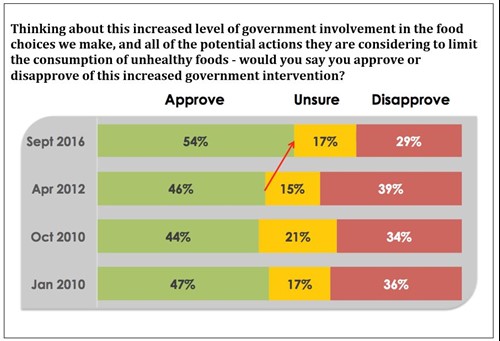 In tandem with this elevated awareness of the importance of the environment on food choices and health outcomes is an increase in the direction of Opinion Leader Shoppers’ support for increased government intervention to limit the consumption of unhealthy foods.

Although the hot-button issues may be displacing attention and debate on food policy, it’s important to keep in mind that everybody eats, usually at least three times a day. So this is an important policy concern that deserves more time for debate and conversation regarding the best approaches for promoting access to healthy foods and helping facilitate public health.