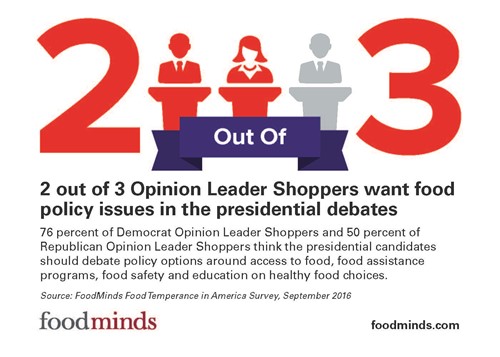 “Since the FoodMinds Food Temperance Survey was first fielded in January 2010, there has been a steady shift in perceived responsibility away from the individual and toward other parts of society including food companies, government, health care and education,” said Grant Prentice, senior vice president, strategic insights, FoodMinds. “In fact, during this six-year time frame there has been a 15-point change among Opinion Leader Shoppers, with more than 50 percent of such shoppers now believing the primary responsibility for making the right food choices lies with society rather than the individual.” While Republican Opinion Leader Shoppers are more likely to place responsibility on the individual compared to Democrats, the percent of Republicans focused on individual responsibility dropped from 67 percent in 2012 to 59 percent in 2016.

“It is clear that Republican and Democratic Opinion Leader Shoppers hold different opinions on food policy and these voters want Hillary Clinton and Donald Trump to debate pressing food policy matters during this election. Given the significant difference of opinion on best policies to adopt, it is imperative that the country engage in this debate,” said Bill Layden, founder and executive vice president, FoodMinds.

About the “Food Temperance in America” Survey

FoodMinds, a division of PadillaCRT, is a food and nutrition communications and consulting company that is boldly transforming the way the world thinks about food, nutrition and health. With offices in Chicago, Washington, DC and San Francisco, FoodMinds expertly navigates science, public affairs and communications to create breakthrough strategies and help clients tell a better story. The firm has 35 employees, including 15 registered dietitians, and a global network of 40 nutrition affairs experts. Over the past year, it expanded its capabilities in Strategic Insights and Issues & Crisis Navigation and continued to grow its global footprint. The winner of the 2013 Holmes Report Boutique Agency of the Year and the 2012 Gold SABRE award in the public affairs category, FoodMinds was named a finalist for PRWeek’s 2015 Small Agency of the Year award and was cited by the 2014 Holmes World PR Report as one of the 10 fastest-growing U.S. PR companies. For more information, visit www.foodminds.com